So, for once, it seems that I'm among the first to receive my pre-order of something from Spartan!
I'd thank the Spartan responsible for making it happen, and at the same time deny knowledge of whatever dark arts that was used in the process...

On to the reason you've come here, pictures of the contents!

Let's start with the box itself: Some really nice minis on display here, Spartans painters has really pulled out all the stops: 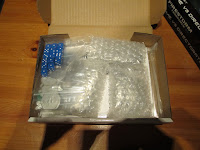 Then we come to the actual contents, the box is of the larger size (not too surprising), but seems to overflow with stuff:

In the box, there is several bubble wrapped bags containing ships, a regular plastic bag with SRS Tokens (! this was not announced in the preorder info...), a sheet of punch-out asteroids, a set of double side tokens (very nice!), and of course a rulebook.
A set of dice completes the set, with everything needed to play straight away. There are also two templates, which I've yet to discover how to use...

So, on to the models themselves. First a overview of all the models, as can be seen, the Directorate ships are larger than the Aquans, which retain their sleek look from Armada. The light frigates are almost needle-thin in their execution, very sleek.

Note the SRS and mini dice to the side (the dice are actually not used in Taskforce, but are added anyway. A nice touch!) 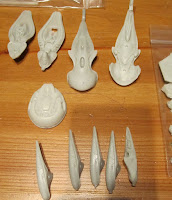 Close up of the Sebrutan ships: Note the Carrier upgrade piece (which actually goes on top of the regular cruiser fore!). The lower hull pieces both have some flash on them, but it is literally leaf thin, and as such should be no issue to remove. 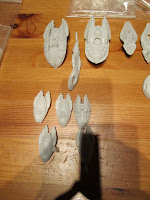 The Directorate ships. Not shown are the turret pieces, meant for the round hole in the rear part of the hull, where the add-on piece regularly sits. Some really nice detail on those!

There are actually five frigates shown, but one is hidden in shadow. 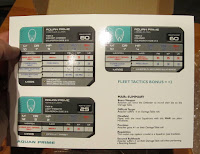 What is this, a quick reference sheet? Indeed, and it is currently the one place to get the rules for the ships included. Looking at the stats might glean some details about the workings of the rules...
The opposite side contains the same for the Directorate.


Then comes the freebees (part of the preorder drive from Spartan): 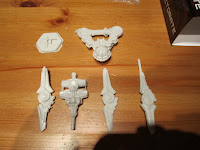 Platform, beacons and a satellite ( SRS for scale).
Should look really nice painted up. 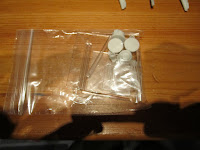